Teaching kindly in Aotearoa under COVID-19

Somehow we were to become a kinder nation. So said our newly elected Prime Minister when she came into power in Aotearoa New Zealand in October, 2017. She was talking to a society that had allowed its base of relative equality to be transformed by a raft of rapid and brutal politico-economic changes from the early 1980s on. A ‘developed’ society that then suffered – and still suffers – around 30% of its children to live below the poverty line. She could not have foreseen the life-shattering events that lay ahead.

First, the mosque shootings in early 2019, in which 51 people died at the hands of a gunman who, just last week, surprised the court by pleading guilty to his murderous crimes. In that awful time of shock and grief, instead of invoking a them-and-us response, Jacinda Ardern donned a headscarf. She turned towards the Muslim community (and the nation) and said, we are you and you are us. In a context of widely unsettled attitudes towards immigration, her stance called us to put such concerns aside, to reach out to others, to show compassion and friendship, especially to members of the (largely) immigrant community so grievously harmed. In this move, Prime Minister Ardern embodied, strikingly, the politics of kindness of which she had so often spoken.

And now, the state of national emergency occasioned by the arrival of Covid-19 on our borders in what seems a lifetime ago. True to form, the word ‘kindness’ often features in our Prime Minister’s regular addresses to the nation – her “team of five million”. And, all around, phrases incorporating kindness have bloomed. Out on the local streets, kindness is the byword for an upsurge in neighbourly relations  – letter drops offering service to those in need, street-level WhatsApp groups.

When national lock-down commenced, our University immediately created a week without teaching. That precious week allowed us, its lecturers, to ‘feel the fear and do it anyway’. We had a window of time in which to figure out some basics for moving our teaching into online mode. We were encouraged to be modest in our ambitions and reminded regularly of the inequalities that lurked out in the wider society, that shaped the conditions within our students’ locked-down homes. That swift action of ‘teaching kindness’ moved something in my (often-alienated) feelings towards my university – it signalled the importance of generosity. Indeed, in that week of no teaching, I felt the benefit of that generosity right down into my bones as I struggled to move my graduate course – with its group of lively, diverse, mature students who had just begun to connect with each other – into online mode. Since then, our national tertiary education union has also evoked the idea of kindness in its widely circulated ‘Working Remote – Covid 19 Principles’ (source: Tertiary Education Union (NZ)), which seeks to keep the crisis of this time to the fore: 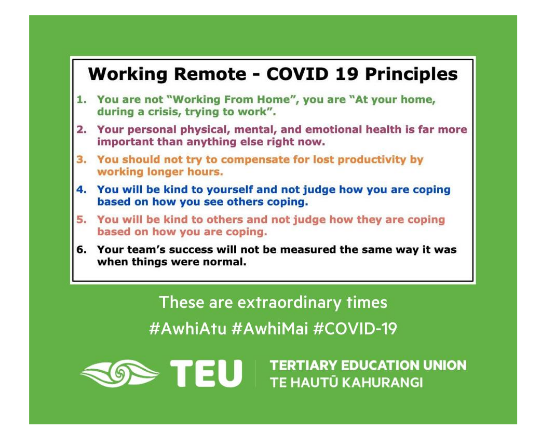 A more personal teacherly invocation to kindness surfaced in an online meeting with my colleagues a few mornings ago, when one described how she had messaged her students to say there would be ‘gentle marking for trying times’. Gentle marking was turning out to be quite challenging: students’ work has been affected, she said, it’s more superficial, less engaged with the ideas of the course. (Few of us, her colleagues, were surprised: we know our own capacity to think, to focus, to write, to have ideas is affected too. We are anxious, distracted. I write this piece in anxious distraction.) Her resolution has now become mine as I grapple with a round of assignment marking: a reminder that acts of kindness, shared, can be contagious.

Alongside these incitements to kindness, the mantra I seek to hold and share with students, as well as colleagues and family members, is “lower your expectations. Then lower them again” (a gift from The Slow Academic). Kindness to self, kindness to others. But, over and over, the mantra slips from my grasp and the familiar feeling of ‘never doing enough’ floods back and with it my expectations of others. How hard it is to break the grasp of our (ruthless) training to be overambitious, perfectionist academic workers, who can never do enough to satisfy the greedy institutions in which we work. How difficult to let go of those damagingly overperforming selves, yet how important. The personal is political, after all.

So I want to affirm the necessity of the politics of kindness. How kindness can be a force for rearranging the structures of our society. Yes, there are the quotidian acts of permission, acommodation, generosity and forgiveness that need to infuse our teaching (and our academic work and lives more generally) at this time. But there are also more complex, difficult and dangerous forms of kindness, those involving acts of dissent and refusal. As we struggle on under various versions of lockdown during a local, national, global crisis that has not yet fully unfolded, we might reflect on what we are learning we can do without, what we are learning is necessary for solidarity and resilience. We might also reflect on what could be different in our institutions and their normative practices, resting as they do on 19th century, often colonial, traditions. Just as some are calling for a reform of the economic system that dominates our world, and others for reforms to the neoliberal preference for lean government, we might call for reforms within our universities. Teaching is one site rich with reform potential: perhaps we can learn from the experience of ‘teaching under crisis’ in order to challenge and transform teaching norms wherever they work to privilege the status quo. Let’s take advantage of this time to forge kinder ways to teach that endure beyond Covid-19, forms of teaching that promote a more hopeful and just future.

25 April 2020 (Anzac Day in Aotearoa New Zealand, on which we commemorate those who died in WW1 and all the 20th century wars that followed)

I thank Claudia Rozas Gomez for ‘gentle marking for trying times’ and Avril Bell for her sharp eye on the first version of this commentary.